What Is An Italian Greyhound?

Italian Greyhounds, also known as IGs, are slender dogs just over a foot tall. They are graceful and sweet, similar to the other taller Greyhounds. These dogs are intelligent and easy to train, as well as playful, preferring to spend a lot of time with their owners.

Weighing around 8-18 pounds, Italian Greyhounds make the smallest of gazehounds or sighthounds (hunting dogs which specialize in using speed and sight when hunting). It is still debated whether or not they were originally bred for hunting or to be companions.

The American Kennel Club (AKC), a United States-based organization maintaining information about purebred dog pedigrees and one of the most recognized dog breed registries in the world, categorizes dogs into 7 groups:

AKC classifies Italian Greyhounds as toy dogs, mainly for their small size. This makes IGs an ideal apartment companion. To add to that, their short, satin-like coat that is easy to groom and their peaceful and affectionate nature make it easy for people to co-exist with them.

Despite its small stature, the Italian Greyhound has been known to hunt small game (any undomesticated animal hunted as food) as well as rats and mice. This makes them the perfect safeguard from household pests.

Traits of an Italian Greyhound

What characteristics do Italian Greyhounds possess, you may ask? Check the list below to find out:

Physical Characteristics of an Italian Greyhound

Italian Greyhounds are quite similar to their Greyhound relatives, only smaller and more slender. Their heads are long and narrow, tapering to the nose. Usually, their noses are either brown or black, depending on their coat. Their teeth meet in a scissors bite. They have dark-colored eyes of medium size, but usually lit up in understanding. Their ears are small and fine in texture, folded back into the head except when alerted.

These dogs are fine-boned creatures, with long, straight legs kept in a dignified posture. They usually stand at 13 to 15 inches.

As for their glossy coats, Italian Greyhounds usually come in various colors, such as blue, cream, gray, red, or white. They can be white with color markings or of a different color with white markings on their chest and feet.

Although they may seem fragile due to their thin bodies, adult IGs are generally more resilient.

Its been said that Italian Greyhounds are old breeds that originated over 4,000 years ago in the countries where Greece and Turkey now reside.

IGs have been depicted in various paintings and pictorials dating to ancient times. An old Egyptian tomb from 4,000 BC has been said to depict dogs similar to the Italian Greyhounds. Not only that there are also evidences of mummified dogs similar to these particular Greyhounds that have been found in Egypt.

Some 2,000 year-old Mediterranean art also show these fine creatures. There have been remains of a dog similar to the IG that has been found in an ancient lava flow in Pompeii, a Roman town-city near modern Naples which was partially destroyed and buried due to the eruption of a volcano.

During the Middle Ages and the Renaissance period, IGs became popular with noblemen, especially throughout Southern Europe. They were brought by the Phoenician civilization to Europe and later became a favorite of the Italians during the 16th century. During that time, miniature dogs were of high demand.

James I of England, Catherine the Great of Russian, and Anne of Denmark were few of those who owned the IGs. Frederick the Great of Prussia took his Italian Greyhound to a war during the 1700s, and buried it at the Sands Souci himself when it died. He wished to be buried next to his brave companion when he died, and during his 205th death anniversary, he was finally reunited with his beloved dog.

In 1886, the Italian Greyhound breed was recognized by the AKC under the toy dog group.

Living with an Italian Greyhound

Italian Greyhounds are very athletic and love to participate in running games. Despite being fast, however, IGs are not well-suited for racing and owners may have to take caution due to their skinny frame when playing with other dogs or people. Walks or runs with their owners might just be enough for them. They can also be active indoors and do fine without a yard. Another thing an owner should pay attention to is their sensitivity to the cold.

These regal, quiet, yet lovable and playful Italian Greyhounds will surely bring enjoyment to you in its lifespan of 12 to 15 years. 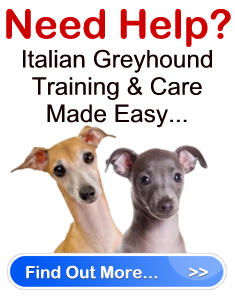